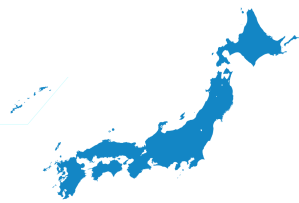 Seeing some recent chatter about Japanese equities being undervalued, I spent some time today looking into it. There is an interesting value opportunity on the Pacific coast if you are willing to take on some risk.

A simple indicator of an company’s value is its stock’s P/E ratio (price-to-earnings). It is the price that you are paying for the company’s earnings. A very general benchmark for value is a P/E ratio below 20, which means you are paying less than 20 times the company’s earnings. I believe I read that figure in Security Analysis by Benjamin Graham. As you can see on the chart below, the US markets, currently around record highs, are somewhat overvalued. 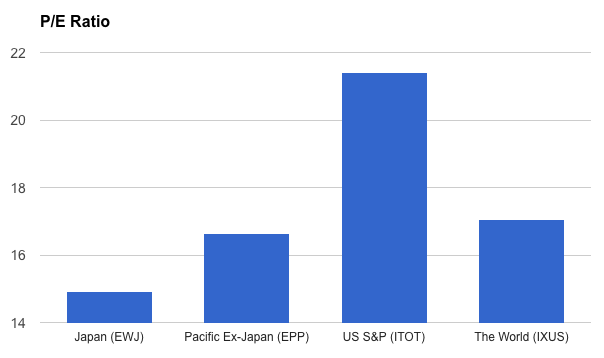 I used iShares ETFs for the above comparison so that the methods of calculating the P/E ratio would be consistent from one to the other. P/E ratios for ETFs do not necessarily reflect the P/Es of their underlying indices exactly (though there is debate about that), but nothing in these appeared out of the ordinary, and I checked 2 sources. The US markets, hovering around record highs over the last few months, have a P/E ratio around 21.42, while the global markets are around 17.04. The Pacific region, excluding Japan, is at 16.64. And Japan is down at 14.92.

The question of course is, why are investors not willing to pay as much for earnings from Japanese companies right now? A hedge fund analyst who contributes to Seeking Alpha shares some ideas in an article today:

Purely from a macroeconomic perspective, Japan’s economy is not in the best shape due to slow growth and a massive debt load. But the Bank of Japan’s (“BOJ”) benchmark policy rate of minus 10 bps and $60 billion equivalent worth of asset purchases per month have created a relatively sound environment for the country’s stock market, especially as economic data have returned higher-than-expected growth and inflation levels.

So growth and debt are the concerns.

Jesper Koll, Head of Japan for WisdomTree, reported yesterday that Japan’s GDP grew by 2.2% (annualized) in the 1st quarter of 2017, beating expectations of 1.7%. That should assuage growth concerns, at least in the short term.

As for debt, there is some concern here. Japan has been running budget deficits each year, building up debt that is 250% of GDP. However, their budget deficits have declined steadily from 9.5% in 2013 to 4.5% in 2016. Progress is being made.

There are a lot of alarmists saying Japan’s debt will collapse its economy. I share their concern, but perhaps not their urgency. People are always saying that about the U.S., which has seen its share of recessions, but keeps chugging along and growing in the long term. Japan is the world’s 3rd largest economy, and it has a culture that has created some fantastic companies. The Japanese deficit may hurt their currency, but a weak Yen can be good for exports, which are the big driver of Japan’s GDP. With the rest of the developed world’s economies doing so well, and with the 11 members of the TTP pursuing their trade deal without the U.S. at an upcoming forum, exports should continue to benefit. Japan has some struggles ahead, but I’m not about to bet a “big short” against it.

I am not advocating going all-in on Japan right now. However, in a business cycle where values are getting harder and harder to find, an index with a P/E below 15 looks very attractive right now. If my 403(b) to IRA rollover goes through in a timely manner, I am considering putting a small percentage of it into one of Charles Schwab’s commission-free Japan ETFs, DXJS, JHDG, or HFXJ, or maybe even eat the transaction fee and invest in DXJ, EWJ, or JPMV. The growing ETF market offers many options for investors to explore opportunities like this one. On summer break and waiting around 2 weeks for this account rollover, I have plenty of time to research and compare them.

Doug is a certified music educator and business educator in Indiana. He directs bands, choirs, and percussion, performs drums and percussion, composes and arranges music for concert band, marching band, and percussion ensemble, and teaches and writes about business, finance, and economics. He has a B.M. in Music Education from Butler University and an M.B.A. in Economics from Southern New Hampshire University. He is also an avid reader and a lover of art, history, science, and nature, especially birds and other wildlife. View all posts by Douglass Gaking

I am a teacher and musician. I teach high school finance and entrepreneurship classes and also take interest in economics. Join me as I explore how to decrease your financial burdens and increase your net worth.